Celebrations and drink specials begin early for the true Irishman on St. Patrick’s Day in Downtown Orlando, on March 17, 2016.

Two of the biggest venues in Downtown Orlando, Church Street Entertainment and Wall Street Plaza (see picture below) will get the party started earlier in the day with great drink specials. Between the two complexes, there are 13 bars featuring deals on drinks and holiday entertainment. In 2016, the Wall Street Bars will open at 12 PM and have $5 Jameson Irish Whiskey, Guinness Pints, and Irish Car Bombs. 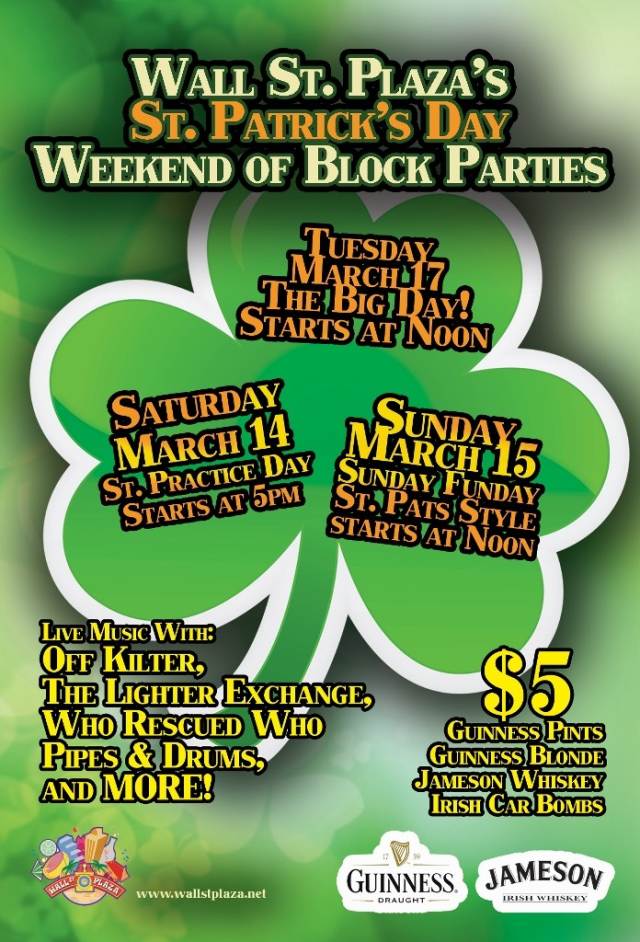 The Harp and Celt

A more traditional gala can be enjoyed at a true Irish restaurant, The Harp and Celt where patrons can dine on customary Irish fare: corn beef, cabbage and potatoes, beef stew, fish and chips, corn beef sandwiches and of course pints of Guinness. This is the bar President Obama had a beer at when he visited the city of Orlando in 2011 (see video below). See the banner below for all of the 2016 St Patrick’s Day festivities at the Harp and Celt:

St Patrick’s Day falls on a Thursday this year, many of the bars will be celebrating St Patrick’s Day in the preceding days with the Church Street District holding a big food and beer event on Wednesday, March 16th, 2016 called the Downtown Brew.

The Downtown Brew will feature food sampling’s from the restaurants of the Church Street District including the Rusty Spoon, Ceviche, Flatbreads from Urban Flats, Bison Chili from Harry Buffalo, and other items from Jersey Mike’s and 7-11. Aloft Orlando will be serving pretzels, nachos, and corn dogs. There will be 36 different types of Craft Beer to drink from.

The all-inclusive price for the event is $20 in advanced and $25 the day of the event and is only open for adults age 21 and up (see flyer below) and will be held from 4 pm until 8 pm.

President Obama at the Harp and Celt