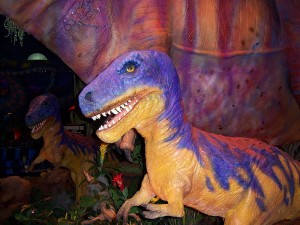 There are things that you say that you will never do before you have kids and places you say you will never go…and then you have a child and that all goes out the door. T-Rex restaurant in Disney Springs is one of those places. When trying to think of someplace fun to go for my 2-year olds birthday for dinner, the options ranged from Chuck E Cheese to a japanese steakhouse. When you look at those two options from an entertainment and dining perspective and compare them to T-Rex and it’s sister restaurant, Rainforest Cafe, there really is no comparison. T-Rex opened at Disney Springs in 2008 and features dinosaurs, woolly mammoths, and several large fish tanks. The animatronics are on par with the Jurassic Park ride at Universal and surround you throughout the meal. The most entertaining and unique experience of the restaurant is the ice cave in the center of the restaurant that flashes different colors during the meteor shower every 20 minutes and the surround sound of the T-Rex that appears to be overhead. It was fun to interact with my 2-year old throughout the meteor shower as she frequently switched from scared to happy all at the same time. The food is on par with most of your national chain restaurants but is noticeably pricier. However, admittance to the restaurant is free and is worth the extra cost that is added on to your bill. If you look at T-Rex as an attraction first and restaurant second, it really makes for a great overall experience.