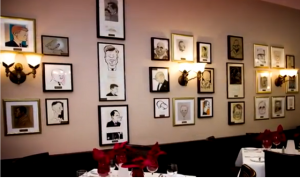 In 2007, my wife and I visited New York City for the first time ever during Thanksgiving and the Macy’s Thanksgiving Day Parade. Spending a week in the big apple, we wanted to take in the classic, historical experience and booked our week in New York at the historic Waldorf Astoria a few blocks from Grand Central Station (the final night we stayed at the Marriot Marquis in Times Square).  A part of the history of the original Waldorf Astoria in New York City is that just about everybody famous from the early to mid 1900’s stayed at the hotel. In fact, every United States President has stayed or lived at the Waldorf Astoria in New York City since Herbert Hoover served as President from 1929-1933. In Orlando, a little bit of the Waldorf Astoria heydays lives on at the Jack’s Place Restaurant at the Rosen Plaza Hotel on International Drive.

Jack Rosen was the Director of Safety at the Waldorf Astoria in New York City from 1932 until 1962. In addition to his primary role on safety at the hotel, Jack Rosen worked as a cartoonist and sketched caricature pictures of guests and dignitaries visiting the hotel in which many of the sketches were signed by the guests themselves. Some of the best of best of the nearly 1,000 sketches of famous guests sketched by Rosen are on display at Jack’s Place restaurant at the Rosen Plaza on International Drive. Jack’s son, Harris Rosen, is the owner of the Rosen Plaza in addition to several other hotels in Orlando (including the Rosen Centre and Rosen Shingle Creek).

If the Hard Rock Cafe has a monopoly on rock star autographs displayed on the walls of it’s restaurant, Jack’s Place makes a strong case for the heroes and important historical figures of the 20th century in a salute to Sardi’s Restaurant in New York City.

Some of the sketches and autographs on the walls at Jack’s Place include such famous heroes of Albert Einstein, Ernest Hemingway, Winston Churchill, Charlies Lindbergh, Harry Houdini, the Pope, Jacqueline Kennedy Onassis, and others listed below:

Click here to visit the official site of Jack’s Place for more information and to book your reservation.

Also, if you want to check out Orlando’s best modern-day sketch artist, click here to visit Thomas Thorspecken’s Analog Artist Digital World blog that is one of the best in the Orlando blogosphere.