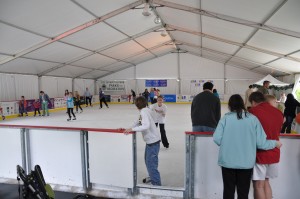 The city of Winter Park introduced an outdoor ice skating rink in 2009 entitled “Winter in the Park” during the Christmas Season and has now made it an annual event. The ice skating rink will open on Friday, November 20th, 2015, through Sunday, January 10th, 2016 in the West Meadow section of Central Park along the shops of Park Avenue.

Winter in the Park Hours of Operation

The cost for ice skating is $12 for unlimited ice skating for the day that includes your skates.

A few years ago, the only option for ice skating in Orlando was to visit the inside rink at the RDV Sportsplex in Maitland. Disney had outdoor ice skating at Downtown Disney in the marketplace for several years followed by the Gaylord Palms a few years later when they introduced their ICE! event but both have since been discontinued.