On January 8th, 2014, the city of Winter Park, along with Budweiser, held a special surprise ticker tape parade to welcome home Winter Park resident Lt. Chuck Nadd for a hero’s welcome from his most recent tour of duty in the United States Army.

The parade was filmed in Winter Park and was shown during the Super Bowl in February 2014. My two daughters (pictured above), along with my wife and son, attended the parade to welcome home Lt. Chuck Nadd and this is our recap of the event.

Local news stations around Orlando started reporting a couple of days before the parade that there would be a parade honoring a local soldier returning home from service but there was no mention of any filming that would be occurring at the event. 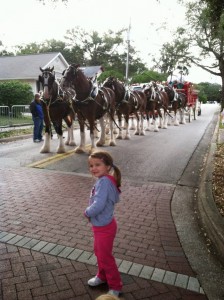 At the actual location of the parade in Winter Park, the organizers of the parade did not disclose what the parade was being filmed for but with all of the videographers around, disclaimer’s of being videoed along the parade route, and the Budweiser Clydesdales involved (see photo to the right) most of the spectators in attendance started assuming that this would indeed be related to a Super Bowl commercial.

Here is a video of the actual parade: 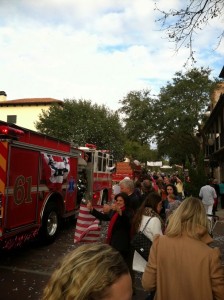 As stated, our family didn’t know ahead of time that the parade would be filmed for a super bowl commercial. Being on a weekday, I had to work but my wife and children jumped at the chance to honor a local veteran. At the photo to the right you can see the confetti celebrating the arrival of Lt. Chuck Nadd and then my daughters having some fun throwing the confetti around afterwards. 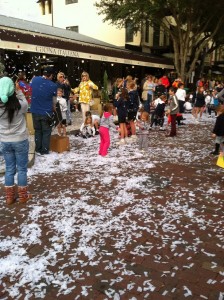 In Winter Park and the greater Orlando area we are very fortunate to have so many leisurely things to do and to take a few minutes of our time to thank those that sacrifice so much of their time and their lives so that we can enjoy those freedoms means so much to our family.

Both our immediate and extended families have men that have served in the US Army, Marines, and the US Navy 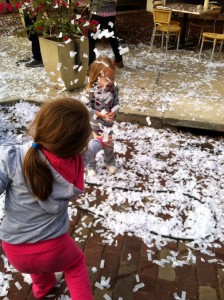 Below is the behind-the-scenes extended video of the parade:

Below is the 60 second advertisement that aired during Super Bowl 48:

There are two main filming locations around Winter Park that are shown in the Budweiser commercial. The location of where the signs were made and stored was filmed at the Winter Park Farmer’s Market and the ticker tape parade was filmed in the Hannibal Square area of Winter Park.

Many visitors to Winter Park will visit the Park Avenue and Central Park locations of the city. Hannibal Square is a few blocks walking distance from the central part of the Park Avenue section (see map below) and has several nice restaurants and shops to visit. Below is a video of the Farmer’s Market and Hannibal Square that you will recognize within the Budweiser commerical.