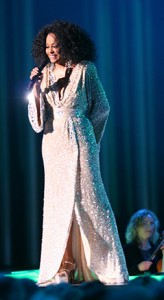 As a founding member of the Motown group The Supremes and then a successful solo-artist, Diana Ross has had one of the most successful musical careers in the industry that led Billboard Magazine to crown her the “Female Entertainer of the Century” in 1976.

Diana Ross has sold more than 100 million records worldwide with such hits as Ain’t No Mountain High Enough, Reach Out and Touch (Somebody’s Hand), Touch Me in the Morning, Love Hangover, and Upside Down.

The Diana Ross concert takes place the night before the NBA All Star Game in Orlando on Sunday, February 26th, 2012.

Diana Ross on The Oprah Show in February 2011