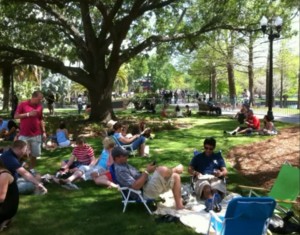 The tradition continues as more than 20,000 foodies and wine lovers experience unique local cuisine paired with wines from around the globe while listening to live concerts at the Downtown Food and Wine Fest in downtown Orlando on Saturday, February 23rd and Sunday, February 24th, 2013.

There are several food and wine and “taste of” events that take place around Orlando throughout the year. With the Downtown Food and Wine Fest, there will be around 40 stations to sample the best that Orlando has to offer.

Admission for the 2013 event is $10 in advance that includes the live entertainment on hand and $15 on the day of the event. Each restaurant will be offering approximately 3-4 items. Each item at the different booths cost between $2 and $8. A limited number of VIP tickets are also available for the event that provide a covered tent and prime viewing areas of the concerts that can be found here.

Forty top restaurants will be participating at the 2013 event including the JW Marriot’s Primo, International Drive’s Taverna Opa, Copper Canyon Grill, and Marlow’s Tavern. Other restaurants participating include choices only to be found in Orlando like The Vineyard Grill, Nona Tap Room, The Pub, Old Hickory Steakhouse, and Dexters.

The festival is located in downtown Orlando along Lake Eola and will be going on Saturday from 12pm until 9pm and on Sunday from 12pm-7pm.  On Sunday afternoon, check out the Orlando Farmers Market.

The event is being presented by MIX 105.1 FM, 1059 SUNNY FM, and 102 JAMZ in partnership with the Florida Restaurant & Lodging Association.

The All-American Rejects and Andy Grammer highlight the concert performances for the event as they take the stage on Sunday alongside Matt Hires, Vicci Martinez, and CeCe TeNeal.

On the Saturday of the event, Atlanta Rythm Section, Kaleigh Baker & Nem, Tropical Steel Drums, and Road Soda will be performing in concert.

The Downtown Food and Wine Fest is one of the best events held in Downtown Orlando throughout the year and is heavily promoted and attended. My wife and I attended the 2012 event and gave ourselves a budget of $20 to spend at the different stations. For $20, you receive 10 tickets ($2 a ticket) and we found that most of your non-alcoholic drink items were about one ticket, appetizers were two tickets, and the sandwiches and entrees were three tickets. The wine that was served at the event was three to four tickets. Desserts including brownies and bread pudding were mostly one ticket.

Some of our observations about the participating restaurants were that the more established vendors in Orlando tended to have their dishes in the 2-3 ticket range and some of the newer restaurants trying to establish their name in the city were in the 1-2 ticket range. Jeremiah’s Italian Ice was the most popular tent selling a small Italian ice for 1 ticket that was well worth it for a hot April day. There were also a few free samples being given out from some of the food vendors and sponsors. Without buying any alcoholic drinks, we were able to leave the festival feeling full and satisfied.

In addition to the musical acts at the festival, there was also a separate stage with celebrity food demonstrations. Combined with the musical entertainment along with the food and wine participating restaurants and caterers, this is a great event that we highly-recommend attending. One of the highlights of the 2012 event was a concert performance by American Idol winner David Cook.