An Open Letter to Dwight Howard and the Orlando Magic 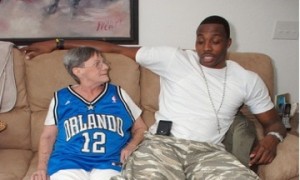 I’ve been reading all of the twitter updates and it seems that the Twitter universe and the Orlando Sentinel are trying to run you out of town like they did someone else. I can tell you that a majority of the Magic fans out there disagree with both of these groups.

Dwight Howard, we know that having you in the city of Orlando does not only make for great basketball but it has also helped to change the community around you. Whereas other sport celebrities have come and gone without ever engaging Orlando, you are different. You are the Kevin Johnson to the Orlando Community. You are the city of Orlando’s next Arnold Palmer, a professional athlete the excels at his game and is out there doing things that others in his sport are not to help better the Orlando community.

So far we know that you have started up your D12 Foundation to help grow communities both in Orlando and throughout the entire world. You have shown your generosity with the people of Haiti, made donations to teen pregnancy programs in Central Florida, and hosted a charity basketball game that you promoted by attending UCF’s homecoming football game and placing free tickets to the event on strip plaza’s around the city.

Before the D12 foundation, you started the Dwight D. Howard Foundation (DDHF), which provides scholarships for underprivileged children who desire to attend your alma mater Southwest Academy and to provide grants for children interested in attending Lovell Elementary School and Memorial Middle School in Orlando.

Outside of your foundation, we know that you spend part of your summers over at UCF for your youth basketball camp, that you frequently makes visits to hospitals, and that you choose to give several hours of your time instead of a few minutes to make a “Dwight Howard” and “Orlando Magic” fan with an incurable disease dreams come true.

Nobody else that has put on a Magic uniform, or really any NBA uniform for that matter, can claim that they are engaging society and the world in the way that you are and regardless of the NBA uniform you are wearing next year, we will forever be thankful.

So that is the rub that makes your resigning different than anyone the Orlando Magic has ever had to sign, both current and former players. With all due respect to Jason Richardson, making sure that you are back in a Magic uniform next year should have been the Magic’s #1 priority this off-season and the ball should be in your court on who is playing alongside you on the Orlando Magic roster. This is YOUR era and YOUR Orlando Magic team.

Everything else being written is just noise. The bottom line is that the Orlando community knows the gift that we have in you being here and we really want you to STAY!

Become a fan of StayDwight.com.

2011-12-12
Previous Post: The Lion King Orlando Broadway Show and Musical at the Bob Carr Performing Arts Centre in 2012
Next Post: Downtown Orlando Christmas Star Celebrates the Past and the Future