If there was ever a time that you wanted to do something different in Orlando and check out Downtown Orlando, the weekend parties in downtown Orlando that feature costume contests is it. For 2018, those nights are Friday, October 26th and  Saturday, October 27th. This is Orlando’s version of Key West’s Fantasy Fest (without the parade and body painting). Thousands of dressed-up locals head downtown each year to show off their costumes to friends and other revelers. This is one of the few times out of the year that the city shuts down Orange Avenue to allow patrons to walk in the street while they bar-hop. October 28th is also a big night with Church Street Bars having their annual costume contest.

While all of the different bars and clubs are packed with their own Halloween events, the two biggest events happen on Church Street on Friday and at Wall Street on Saturday:

On Friday, October 26th, 2018 on Church Street, the Church Street Bars of Chillers, Latitudes, and Big Belly  jointly hold their Halloween Party with a Pub Crawl. Click on the event information below for more information:

Plazaween is Wall Street’s Halloween party that is a ticketed event that has live music in an open setting surrounded by 8 clubs and bars. If you are looking for an alternative to the old Pleasure Island, this is your answer. 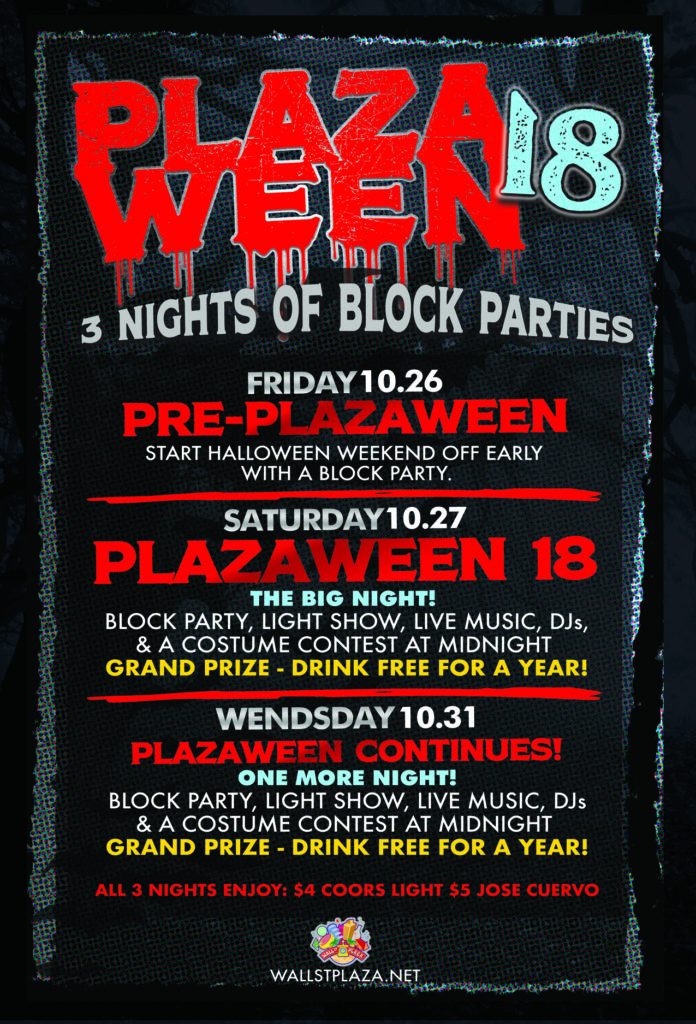 Downtown Orlando Things To Do

If bars are not your thing but you would still like to see everyone dressed up on Orange Avenue and still make a night of it, there is an upscale movie theatre in the heart of Downtown Orlando showing the latest movies and an Improv Comedy Club (ie. Chicago’s 2nd City / Pleasure Islands Comedy Warehouse), where Wayne Brady got his start, that has a Halloween show to see. All of the bars, theater, and the comedy club listed above are all within a 5 minute walking distance to each other at the intersection of Church Street and Orange Avenue.

The theme parks have their own events that appeal to all age groups. See our links below on other Halloween events for kids and teenagers to find out what Disney, Universal, and SeaWorld have to offer.