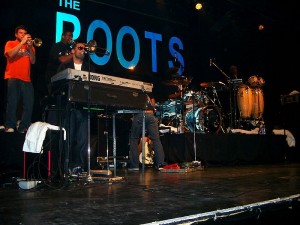 The Roots are scheduled to perform in concert at the Orlando Calling Music Festival on Saturday, November 12th, 2011.

The Roots specialize in jazz influenced hip hop and are currently the house band for Late Night with Jimmy Fallon on NBC. The Roots last played in Orlando in March 2011 for Universal’s Mardi Gras.

The Roots play the House of Blues in Orlando in 2007