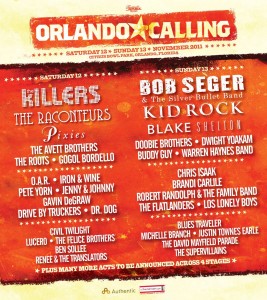 In 2004, Kid Rock inducted rock legend Bob Seger into the Rock and Roll Hall of Fame. In November of 2011, the two of them will share the same stage in the inaugural Orlando Calling Music Festival. Orlando Calling 2011 is the beginning of a brand new annual music festival that will be held in Orlando each year that will include concerts from headliners The Killers, The Raconteurs, Kid Rock and Bob Seger & The Silver Bullet Band in it’s inaugural year along with 31 additional performers including Blake Shelton, Gavin Degraw, Chris Isaak, The Roots, and Michelle Branch.


The Orlando Calling Music Festival will hold it’s first festival on Saturday, November 12th and Sunday, November 13th, 2011 at the Citrus Bowl with the main stage in the Citrus Bowl itself and three other stages on the perimeter of the stadium around Tinker Field (see map below). The Festival is being promoted from Festival Republic, the United Kingdom’s largest festival and event promoter. This is the first big music festival in recent times that has been held in all of the state of Florida.  Tickets go on sale at 10 AM Saturday, July 23rd. Tickets purchased before Sept 1st cost $80 for a one-day pass and $145 for a two-day admission pass. After Sept. 1st the prices go up to $87.50 for a one day pass and $160 for both days. 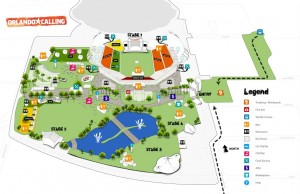 In addition to the artists playing at the Citrus Bowl, the organizers are coordinating with the city of Orlando for festival patrons to park their cars in the parking garages in downtown Orlando with safe pedestrian walkways presumably along Church Street to the Citrus Bowl. The party will continue well into the night with live music at the Downtown Orlando bars and night clubs. There will also be Park and Ride parking organized at the Central Florida Fairgrounds.

A full listing of the artist can be found on the lineup page for the event. Blues Traveler was originally listed as a participating band for the event but will not playing at Orlando Calling in 2011.

Click Here to see music videos from many of the performing acts in our forums and add your favorites.