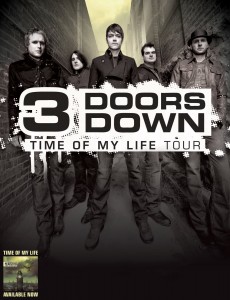 3 Doors Down has been cranking out rock hits since 1996, really taking off in 1999 with such hits as Let Me Be Myself, Kryptonite, Loser, Duck and Run, When I’m Gone, Let Me Go, Behind Those Eyes, It’s Not My Time, Train, and Citizen/Soldier.

3 Doors Down at Universal Studios in 2010