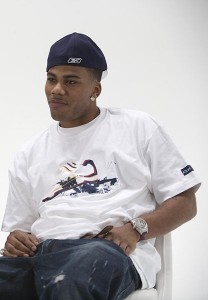 Nelly is best known for his popular top 40 hit Hot In Here that talks about taking off your clothes to cool off or something like that. Other popular songs from Nelly include Country Grammar, Ride Wit Me, Dilemma, Work It, Air Force Ones, and his most recent hit getting a lot of airplay, Just a Dream.

Nelly has also had acting success staring in The Longest Yard with Adam Sandler and Chris Rock and also has the successful fashion line of Apple Bottom jeans.

Nelly at Universal Studios Orlando in 2009