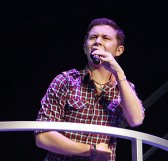 With the mainstream success of Country Music these past few years, Scotty McCreery has gone on to make a name for himself with country pop hooks and a touching personality winning the tenth season of American Idol and remaining relatively popular among tough competition.

Sea World Adventure Park hosts a wide collection of aquatic life and family friendly adventure. On March 4th, 2012, you will be able to experience the underwater nature of Sea World with the swooning country sensibilities of Scotty McCreery for his appearance at the Bands, Brew, and BBQ Festival.

Scotty McCreery is promoting his debut album Clear as Day, having just been released last October on Mercury Records. He has broken several billboard records already and is breaking the dry spell of soft recording sales that have occurred with the most recent American Idol winners with greater record sales and a larger touring budget.

Specific times for the concert are yet to be specified.

Scotty McCreery at Hollywood Studios in 2011